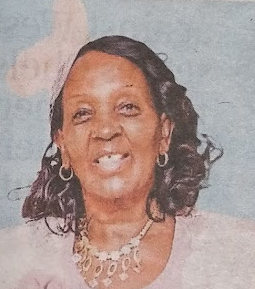 It is with humble acceptance of God’s will that we announce the death of Catherine Wahinya Ng’ang’a, which occurred on 19th April, 2022 after a short illness.

Daughter to the late Moses Karonga and the late Rahab Wangui.

Daughter-in-law to the late David Kamau Chege and the late Elizabeth Wambui Kamau.

Family and friends are meeting daily for prayers from 5:30pm at their residence in Ridgeways.

There will be a requiem mass on Monday, 25 April, 2022 at the Our Lady of Rosary Catholic Church Ridgeways at 1.30pm.

The cortege will leave Montezuma Monalisa Funeral Home, Raila Odinga Road, Lang’ata, on Wednesday, 27th  April. 2022 at 7:30am for a funeral service at St. Peter, The Rock, Catholic Church, Kimende and thereafter burial at their farm in Kimende.

“I have fought the good fight, I have finished the race, I have kept the faith.” 2nd Timothy 4:7