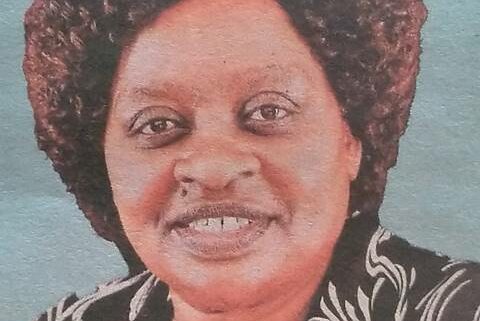 It is with humble acceptance of God’s will that we announce the death of Dr. Bathsheba Kerebi Osoro that occurred on October 30, 2022 at Coptic Hospital following a long illness.

She was the beloved wife of Eng. Daniel Osoro and the mother to Wycliffe Osoro and Judith Anyona, Phyllis Wakiaga and Justice James Wakiaga and Edmond Nyamiaka. She was a loving grandmother to Rania, Aryana, Jeremy,Alicia, Justin, Joel, Joshua, Knapek among others.

She was a Korera to Canon Augustine & Mary Omondi and Beldina Wakiaga.

Prayer meetings will be held on 9th and 10th November 2022 at Nairobi Central SDA Church from 5.00 pm.

The final fund raising and prayers with the family will be held on November 14, 2022 at Nairobi Central SDA Church, Old Sanctuary from 5:00 pm.

On November 17, 2022, we will hold a funeral service at Nairobi Central SDA Church from 10am.

The cortege will leave Umash Funeral Home on November 18, 2022 at 9:00 am for a service at Africa Nazarene University Grounds and thereafter for burial at the family home in Oloosirkon, Lengete Estate, Ongata Rongai.

Jeremiah 29: For I know the plans I have for you, says the Lord, plans for good and not evil, to give you a future and a hope.