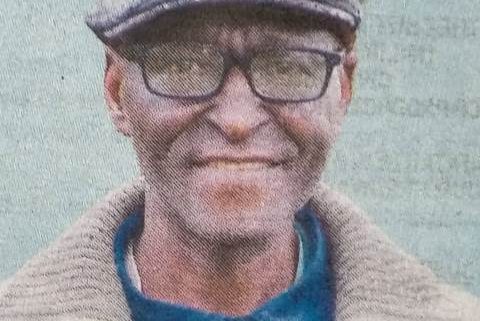 It is with deep sorrow and humble acceptance of God’s will that we announce the promotion to glory of Eng, John Giteru Muturi former Assistant Chief City Engineer at Nairobi City Council which occurred on 26th August, 2022 at AIC Kijabe Hospital. He was born in Mahiga Location, Othaya Sub-county, Nyeri County.

Brother-in-Law to Cyrus Mwaura Miru (Cyran enterprises) & Anne Njeri Mwaura and many others.

Grandfather to Taji Giteru Nyaga, Tephilah Amalia Njoki Miru & Asher Giteru Miru. He was an uncle and cousin to many.

Family, friends and well-wishers are meeting daily at his home in Mt Zion Street, Kiamumbi from 5:00 pm for prayers and to prepare for his final farewell.

The cortege will leave Kenyatta Memorial Funeral home next to KU Referral Hospital at 8:00 am on Saturday, 3rd September 2022. The funeral service will be at his farm in Kamurio village. Nanga Location ,(Nanga Kihoto next to Delmonte farm) at 10:00am. The burial will be held at the same location.

Giving thanks always for all things unto God and the Father in the name of our Lord Jesus Christ. (Ephesians 5:20)