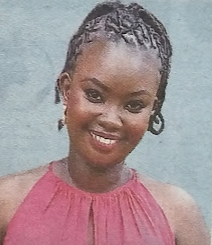 It is with great sadness and sorrow that we announce the death of Esther Njambi Ngure, which occurred on 22nd March, 2022 at Kenyatta National Hospital.

Friends and family are meeting daily at her home in Kitengela, Cereals Estate (Nafaka), from 5.00pm to 6.30pm.

The cortege will leave Kenyatta National Hospital Morgue at 7.00am on Tuesday 29th March, 2022.

The funeral service will be held at ACK Holy Trinity Church in Kitengela at 10.30am.

Thereafter the body will be laid to rest at their home in Cereals Estate (Nafaka) Milimani Kitengela.

In God’s hands you rest, in our hearts you live on.

“Being confident of this, that He who began a good work in you will carry it on to completion until the day of Christ Jesus.”