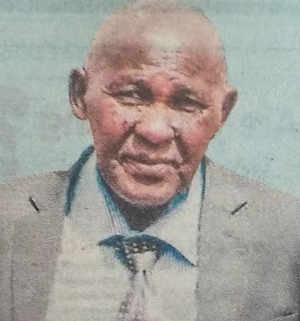 It is with humble acceptance of God’s will that we announce the death of Gabriel Mwaura Njoroge of Ongata Rongai, Maasai Lodge, Kajiado County.

The late Gabriel was son to the late Micheal Njoroge and the late Elizabeth Wangui Njoroge of Kaharo Village Kandara Murang’a County.

Brother-in-law to the late Wacai, the late Mburu, the late Njanju, Miriam and Njoroge muthana, Kamau, Ruth, the late Nyoike, Kimani, Nyakeru, Kariuki all from Nuranga and Philip, Gilbert,Victor, Careb,Teddy, the late Emily Boinnet all from Nakuru County.

Uncle to George,Tony, Cathy, Reginah,Vincent, Kangethe, jimmy among others. Friends and relatives are meeting daily at his home in Rongai and Kaharo Village Ngararia, Kandara.

The cortege will leave Kenyatta University Mortuary Thika Road at 8.00am, followed by funeral service at 11.00am and burial at his ancestral home in Kaharo Village Ngararia Location Kandara Constituency Murang’a County, on 6th August 2022.

2nd Timothy 4:7 “I have fought the good fight! have finished the race, I have kept the faith.” Till we meet again RIP.