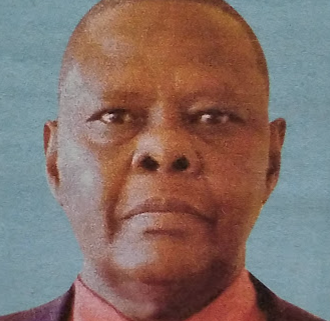 It is with deep sorrow and humble acceptance of God’s will that we announce the passing on of Major General (Rtd) Michael Mulwa Munyoki (KDF), former Managing Director, Kenya Ordnance Factories Corporation (KOFC) and Chairperson Ministerial Ad Hoc Committee on Military Lands, which occurred on 2nd March 2022 at Nairobi Hospital.

He was the son of the late Munyoki Sumbu and the late Regina Mbutha Munyoki. Step son to Kaindi and Kaman.

He was the Father-in-law of Collins Ojiambo and David Muriithi. He was a doting grandfather to Naima Regina, Milan Wafula, Gabriella Muthoni, Tyannah Mumbi, Noah Michael and Mercedes Mbithe.

He was a brother to the late Philip Kilonzo, the late Stanslaus Makanda, Raphael Mbuvi, Joshua Mulinge and Julius Muthui, Bonface Makau, Patrick Ngala, the late Kasivwa, the late Mulili and Mary Muema.

He will be laid to rest on Tuesday, 15th March, 2022 at his home, Museve Village in Kitui County.

The requiem mass will be held today Thursday 10th March, 2022.

“Michael, you fought like the soldier you are! Rest In Peace”— Romans 8:28