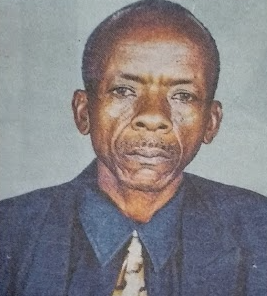 It is with deep sorrow and humble acceptance of God’s will that we announce the passing of Simeon Omboga Makori, which occurred on Good Friday the 15th day of April 2022.

He was the son of late Evaresto Makori and late Tekera Obaga of Keumbu and step son of Mama Maria.

He is also survived by 23 grandchildren and one great-grandchild. Uncle to Dr. Ken Omanga, Iteba, Richard, Prof. Robert Arasa, The Makori’s, Aruya, Amuomah among others.

The Requiem Mass shall be held on Friday 6th May 2022 from 8:30am at Banana Grounds next to Banana Resort & Gulf Petrol Station at Nyosia (between Kegati and Keumbu, Kisii).

There will be a main fundraising to offset hospital bills and to support the burial arrangements on 4th May 2022 at 5:00 p.m at Nairobi Maxwell SDA Church Old Sanctuary (opposite Integrity Centre).