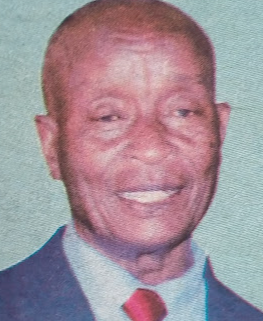 It is with deep sorrow and acceptance of Gods will that we announce the passing on of Stephen Kibuku Chengecha of Kihuyo village, Nyeri County, which occurred on Saturday 5th March, 2022.

Son of the late David Chengecha and the late Grace Wamucii. Beloved husband to the late Margaret Wangui and Generosa Njeri.

Brother-in-law to Patrick & Susan Gachoka, Charles Jecinta Gitonga, among others.

Family and friends are meeting daily at his son’s residence in Nyeri Town, opposite Nyeri Technical Institute and at Kihuyo Home, from 4:00pm.

The cortege leaves Nyeri Funeral Home (Outspan), Friday 11th March, 2022 at 8:00am for the funeral service and burial at his home in Kihuyo from 10:00am.

2nd Timothy 4:7 —”I have fought the good fight, I have finished the race, I have kept the faith.”