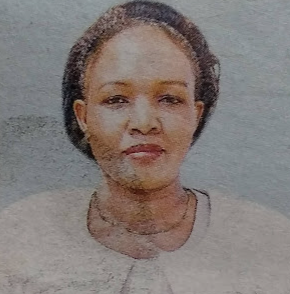 It is with profound sorrow and humble acceptance of God’s will that we announce the passing on of Susan Wanjiru Kinuthia (Wa Julia), which occurred on 2′ March, 2022 at Aga Khan University Hospital.

Beloved wife to Michael Ng’ethe of UNON. Daughter to the late B.G. Ngugi and the late Naomi Wanjiku Ngugi and stepdaughter to Serah Wangui.

She is survived by many nieces and nephews.

Family and friends are meeting daily at her residence in Ndenderu near Soul Winning Church.

The cortege leaves KU-Referral along Northern Bypass on Thursday, 10th March, 2022 at 8:00am, for a funeral service at ACK St. Andrew’s Ndenderu and thereafter burial will take lace at their home at Karura-Kagongo.

“I have fought the good fight, I have finished the race, I have kept the faith.” 2 Timothy 4:7