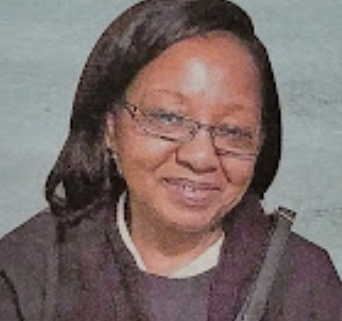 It’s with deep sorrow to announce the demise of Agnes Mwelu Wesonga.

Agnes was the beloved wife to Albert Omollo Wesonga.

She was an absolutely dotting Grandma to Abby Wesonga, Albert Masha and Yves Katana Fondo, JeffWesonga,Agnes and Albert Njau.

She was daughter to the late Francis Makau and the late Veronica Kaswi Makau.

The cortege leaves Lee Funeral home on the 11th March, 2022 to her home in Bungoma Town.

The body will be laid to rest on the 12th March, 2022 in Namatotoa Village, Khasoko Ward, Bumula Sub County, Bungoma County.

A pillar to our family, you will always be in our hearts. We love you.

Proverbs 31:28-29 —”Her children arise and call her blessed; her husband also, and . ‘ he praises her: “Many women do noble things, but you surpass them all.”