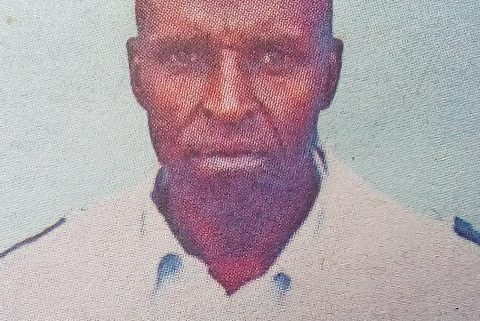 We announce the promotion to glory of the late Retired Siakago High school teacher Eshban Samuel Njiru Nyaga of Kiringa village, Embu County, which occurred on the 14th October, 2019 at the Outspan Hospital Nyeri, while undergoing treatment after a road accident that occurred along Siakago-Ugweri road.

Friends and family are meeting at old Salvation Army headquarters, next to Jeevanjee garden, Nairobi from 5.00pm everyday, at his home in Kiringa village, Kagaari South and at his late parents’ home in Mbiruri village, Runyenjes for funeral arrangements.

The cortege will leave Gakwegore Funeral home on Friday the 25th October, 2019 at 8.00am for funeral service at Salvation Army Karurumo Corps starting from 10.00 am. This will be followed by burial at his home in Kiringa village, Kagaari South Embu County.

There shall be a main fund raising event today, Tuesday the 22nd October, 2019 at the same venue, the old salvation Army headquarters, opposite to Jeevanjee Garden and next to Arusha Shuttle Offices. To offset medical bills, starting from 5.00pm. For Mpesa contributions please use mobile no. 0729156730.

God has given and God has taken. May His name be praised.