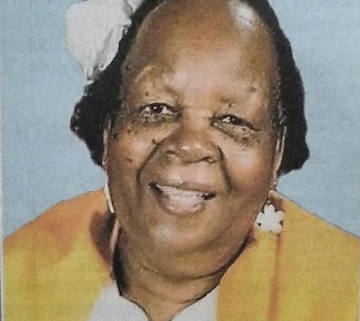 We humbly accept God’s will as we announce the passing-on of our beloved mum, grandmother, great grandmother & friend Esther Wanja Mureithi Mbichire, which occurred on Monday, April 4th, 2022 in Seattle, USA.

She was daughter of the late Peter Muthiga & Mary Wanjira, sister to the late Gichina, the late Mukiha, the late Wairimu, the late Thairu and Charity Gachugu.

She was a sister-in-law to Stanley Njau Mureithi of Sagana.

Step-mother to Eston Munene, Joyce Nyawira, Bernard Mwangi, Geoffrey Githinji, Magaret Wanjira, the late Jeremiah Karoki and Jane Njoki. She was a grandmother and great-grandmother to many.

The Memorial Service in Kenya will be held at Our Lady of Rosary Catholic Church, Ridgeways, along Kiambu Road on Sunday, April 24th, 2022 at 2.30pm.

“I have fought the good fight, I have finished the race, I have kept the faith.”- 2 Timothy 4:7