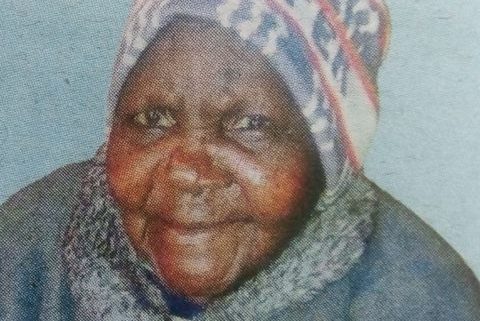 She is the daughter of the late Kimani Ngure and the late Nyambura Kimani. She was the wife of the lath Gitehi Kiondo. She was the mother of Hannah Wanjiku Robe, Mary Nyambura (Wamurathi), John Kiondo (Fundi), Margaret Gathoni Kihumba, Hannah Njeri, Joseph Muya, the late Stephen Kimani and the late Grace Wanyiri Ng’ang’a. She was step mother to Titus K. Muya of Family Bank Limited among many others. She was sister to the late Ngure Kimani, the late Wanyiri Chege, the late Murathi Kimani, the late Kamau Kariuki and the late Kariuki Kimani. She was grandmother to Gitehis, Wambuis, Nyambura, Kihumba and many others. She was aunt to Nyambura Ruigu, Kimani Kariuki among others.

Friends and relatives are meeting at her home in Gataka for prayers and burial arrangements.

The cortege will leave Tigoni Hospital mortuary on Friday 7/12/2018 at 9.00am. Funeral service will be held at Gataka Primary School grounds and later Burial at her home in Gataka.