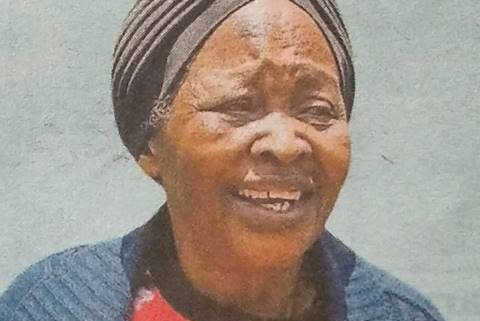 It is with humble acceptance of Gods will that we announce the passing on to glory of Mama Eunice Nyasuguta Makori of Nyansiongo Settlement Scheme.

Sister-in-law to the late Morema, the late Nyabera, the late Rebecca Nyang’au, Nyamanyi, Machuma among others.

Family and friends are meeting at her Nyansiongo home and in Nairobi.

There will be a church service on Wednesday, 13th July 2022 at Maxwell S.D.A Church Nairobi from 2:00 pm followed by a fundraising at the Old Church Sanctuary on the same day at 5.00pm.

The cortege leaves Lee Funeral home on Thursday, I4th July 2022, for Nyansiongo home. She will be laid to rest on Friday, 15th July 2022.

Romans 8:28 “And we know that in all things God works for the good of those who love him, who have been called according to his purpose.”