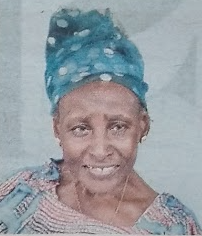 It is with profound grief and acceptance of God’s will and His sufficient grace that we announce the promotion to glory of Mrs Grace Idah Msindah (Formerly KPA) on 08/04/2022.

Sister to Edith Fondo and sister-in-law to Elizabeth Tunu, Them Mushrooms, Saburis and Deches.

Burial ceremony will be on 16th April 2022 from 10am at the Harrisons Residence Kaloleni, Giriama.

2nd Timothy 4:7 – I have fought the good fight, I have finished the race and I have kept the faith. Praise be to God.