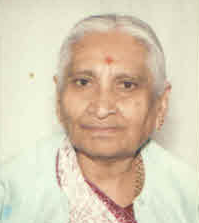 She was Grandmother of Bindya Mitesh Shah, Rahul & Shital, Neera Damian, Nikhil & Shreena, Rattna and Siddharth (all of London).
She was Great Grandmother of lyla, Freya and Alek (all of UK).

Motiben’s Cornea were donated to Kanubhai Babla Lions National Eye Bank “When someone you love becomes a memory, the memory becomes a treasure”