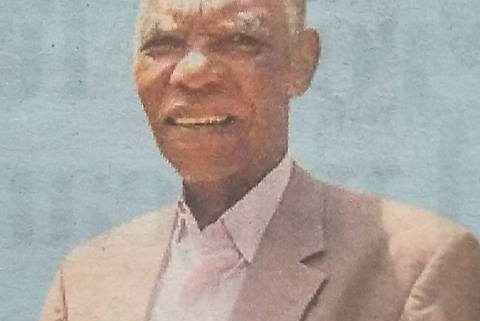 It is with humble acceptance of God’s will that we are saddened to announce the passing on of our Patriarch Nicasio Jomo Njeru Njoka at sunset on Sunday 4th September, 2022.

Dearest husband to Mildren Mbucu and beloved father to Kelvin, Hilda and Obadiah, Edwin and Teresiah and Illuminata and Dennis.

He was a doting grandfather to Curtis, joy, Austin, Natalie, Sophie, Nathan, Nevan and Winnie. He was uncle, teacher and mentor to many.

Family and friends are meeting daily at his home in Kimuri Village, Runyenjes, Embu County from 4.00pm.

The cortege will depart from Kyeni Mission Hospital Mortuary on Wednesday 14th September, 2022 at 9.00am for a requiem mass at Gitare Catholic Church at 10.00am.Thereafter the burial rites will take place at his home in Kimuri Village, Runyenjes.

“For if we believe that Jesus died and rose again, even so God will bring with Him those who sleep in Jesus.” — 1 Thessalonians 4: 14