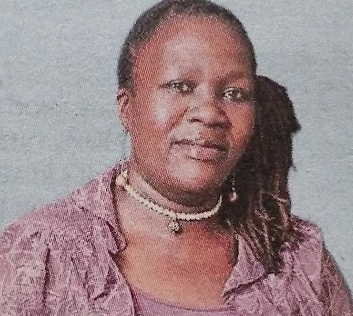 It is with great sadness that we announce the sudden passing on of Pamela Andia Lung’aho-Ochieng on Tuesday, 29th March, 2022.

Pam was the daughter of the late Shem A. Lung’aho & Esther Andisi Lung’aho of Munzatsi, Vihiga. She was a wife to the late Gabriel Ochieng Madung; loving mother to Sharon Afandi and Frank Rono, Marianna Ayoo, John Odanga and Emma Atieno Ochieng, and a doting grandmother to Kimutai.

Pam was a sister to Lillian and the late Seth Asena, Charles and Mary Lung’aho, Tom and Annie Luvai. Daughter-in-law to the late John Odanga and the late Mary Atieno Madung of Ukwala, Ugenya.

In-law to the family of Madam Ruth Maina of Sachang’wan, the late Lawrence and Cynthia Lang’at.

She was a loving grandmother, auntie, cousin and an engaging fnend to many. There will be a requiem mass to celebrate Pam’s life on Thursday, 7th April from 10am at Holy Trinity Catholic Church, Buruburu Phase I from 10. 00a.m.

The cortege will leave Chiromo Mortuary on Friday, 8th April, 2022 for funeral in Ukwala on Saturday, 9th April, 2022.

TO SUPPORT FAMILY USE:

Pam has fought the good fight, she has finished the race and kept the faith (2 Timothy 4:7)