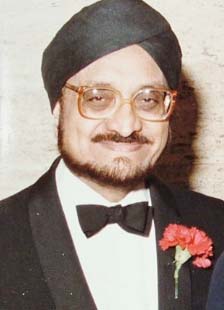 Want create site? Find Free WordPress Themes and plugins.
Kenyatta artist dies
Dial Singh Sagoo, the artist who drew Jomo Kenyatta in 1961 while he was held in detention in Maralal by the British colonial government, has died in London aged 95.
Mr Sagoo was a well known identity in the Sikh community in pre-independence Kenya.
Together with his father, Labh Singh, and brother Kirpal Singh, who was a member of the Legislative Council, they owned the British Furniture House.
However, art was in Sagoo’s blood and he received formal training in Italy.
He made portraits of many leading identities in Kenya at the time, including the author Robert Ruark, as well as visiting dignitaries, including Sarvepalli Radakrishnan, second president of India.
His portrait of Mzee Kenyatta was reproduced, with proceeds from sales supporting overseas scholarships for Kenyans.
The Sagoo family left Kenya in 1962 for London, where Sagoo continued as a portrait artist, the highlight of his career being an exhibition at the Royal Academy.
This led to commissions from well known identities, including Lord Mountbatten, Lord Beeching and his friend, Nairobi-born Sir Mota Singh, who became Britain’s first Asian judge and who himself died earlier this month.
Sagoo leaves a wife, Rajinder, two daughters, four grandchildren and nine great-grandchildren.
His son-in-law Jasminder Singh Warah, better known as Shandy, who died in 2007, was a prominent Kenyan cricketer and motor sportsman.
His other son-in-law, Philip Powell, worked as a public relations consultant in Nairobi in the 1970s.
His funeral takes place at the Sikh gurdwara, Southall, London, on Friday, November 25.
Did you find apk for android? You can find new Free Android Games and apps.
https://obituarykenya.co.ke/wp-content/uploads/2016/11/Sagoo-copy.jpg 310 224 Obituary Kenya https://obituarykenya.co.ke/wp-content/uploads/2020/05/Life-in-Legacy-Logo.jpg Obituary Kenya2016-11-23 16:44:542016-11-23 16:44:54DIAL SINGH SAGOO
0 replies