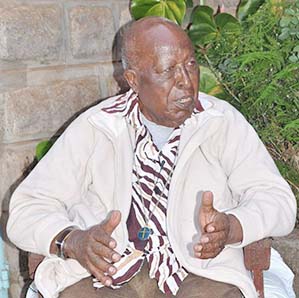 The Presbyterian Church of East Africa wishes to announce the passing on of The
Very Rev. Dr. John Gatu.  The Church Father passed on the evening of Thursday,
11th May 2017 at 5.20 p.m. at Karen Hospital where he was receiving treatment from
2nd May 2017 at the ICU after he collapsed at his Muteero home- Karen.  He had just celebrated his 93rd Birthday in March.

The Very Rev. Dr. Gatu was the Moderator of the Presbyterian Church of East Africa (PCEA) of the 9th and 10th General Assembly (1979 – 1985).  He was the first Africa Secretary General of PCEA (1963 – 1979) and was among the founders and pioneer of the World Council of Churches.  He was quite instrumental and pioneer of ecumenical movement in the African continent that led to the birth of All Africa Conference of Churches (AACC).  As the great Kenyan he requested the government to allocate land for the construction of AACC Offices which was granted at Westlands.   The Late Church Father as well got involved in the establishment of World Council of Reformed Churches.  An icon of this Church, he lived with dignity, preached with passion and worshipped with serenity.

Our Church Father was a key Architect and founder of Jitegemea philosophy and lobbied for the issue of moratorium and had an opportunity to address the Church at the GAC in April 2017 at Alliance Girls High School just a week before being hospitalized.

Though saddened by the death of this great man, we thank God for the time and service of our Church Father.  The entire PCEA send our heartfelt condolences to the family and friends of our departed hero, mentor and father.

The peace of God be with you all.